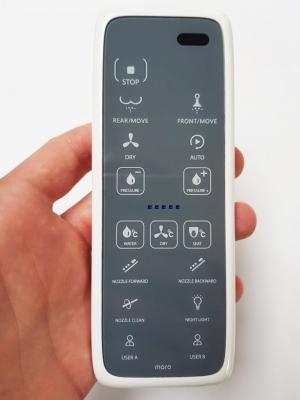 There are plenty of things to hate about flying, but having to repeatedly use a public (and very tiny) bathroom over the course of several hours is up there. That could change in the near future, though. Travel + Leisure reports that Zodiac Aerospace, a manufacturer of plane cabin interiors, is working on a fancy plane toilet like no other—outside of private jets, that is. Yes, it's a toilet with a built-in bidet.

Zodiac debuted its new design at the recent Aircraft Interiors Expo in Hamburg, Germany. The company's latest and greatest toilet, which you can operate from a remote control that would be installed on a wall of the bathroom, features an adjustable water spout that retracts and can provide a nice spray for both the front part of your undercarriage and your back end. For those who understandably worry about germs on their airplane toilets, it comes with a special UV light to disinfect the loo.

According to Travel + Leisure, Zodiac's bidet-equipped toilets will most likely appear first on airlines based in places like Asia, the Middle East, and Europe, where bidets are more commonplace. The design might not be so appealing to airlines in the U.S., which is strangely averse to two-in-one toilet/butt-washing technology.

It's rare to see a plane upgrade that's actually good news for travelers. While there is the occasional proposal that might make economy travel more comfortable—like a design that would make middle seats wider and more accessible, or a seat that could alert the crew if you're having a panic attack mid-air—most new proposals would make flying even more of a nightmare than it already is, like a seat Airbus proposed in 2014 that would put passengers essentially in rows of bicycle seats for their entire flights.

Zodiac hasn't announced whether a specific plane or airline already plans to put this upgraded toilet into use, so it could be a while before you get to use it for yourself. Sorry, butts.