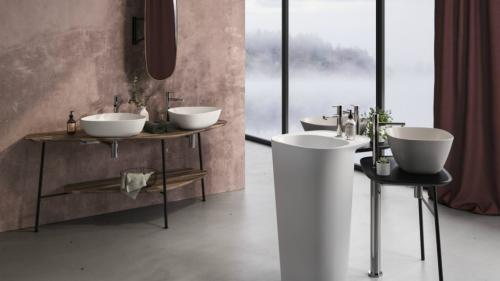 VitrA will use designjunction to launch its Plural collection, created by American designer Terri Pescora, in the UK.

Introduced at Salone del Mobile, Plural is inspired by the heritage of communal bathing spaces and has been created as an informal living space.

It re-interprets the traditional bathroom layout and encourages new ways of using the space, allowing a designer to layer and group pieces in overlapping heights, colours and configurations.

The collection includes a choice of siphons which allow basins to be placed at various angles, or mounted in an open bathroom space, and mirrors that can rotate between basins.

Design director of VitrA Erdem Akan commented: “At VitrA we wanted to create a new methodology that responds to the recent evolution of the bathroom ritual. We focused on the time spent in the bathroom and our interaction within the space rather than the products.

“This investigation led us to work with Terri Pecora on the design of the Plural collection, which reinterprets the bathroom as a social hub.”

These include Doon Street, which will feature contemporary design, lighting and pop-up shops; Riverside Walkway with outdoor installations, and the Oxo Tower hosting experiential features.

Designjunction is part of the London Design Festival, which will also see Laufen presenting its Dim Sum concept at the Kartell showroom in Knightsbridge.