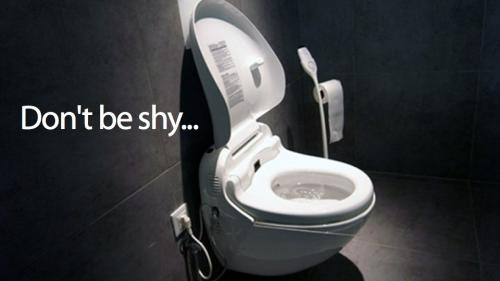 Marc and his wife live in America’s humid south, where sometimes, toilet paper just isn’t enough. “If you're working outside, as I used to do all day, it's not pleasant, so being clean after using the toilet helps prevent the dreaded ‘swamp ass’,” he says.

Now, he’s fighting back. The couple are one of many Westerners converted by the joys of the Japanese-style, all-in-one electronic bidet and toilet – smart shower toilets, as they’re known. These toilets sing (literally, to cloak the noises). Some massage your cheeks, others heat the seat, and instead of submitting you to the barbaric task of wiping, you press a button and a bolt of water is squirted toward the relevant area with the force and accuracy of a laser guided Super Soaker.

The benefits are seemingly endless. “It makes using the bathroom a much more pleasant experience. You’re not wiping, you feel cleaner, and I recently broke my wrist, elbow and bruised some ribs and the bidet was amazing,” says Marc, before getting a little more graphic. “Also I eat a lot of spicy food so it's very helpful for that – it alleviates the burn.”

Until recently these porcelain poo-topias were mostly a Japanese and South Korean phenomenon, but now they're breaking into European and American markets. “Technology can take over the world, even in the toilet market,” says Asuka Osada, European marketing manager at TOTO, Japan’s biggest toilet company.

Bog, khazi, throne, crapper – whatever you call a toilet, TOTO has been revolutionising it ever since the Japanese inventor and company founder Kazuchika Okura built his first in 1914. Technologically superior loos made their first big splash in 1980 with the TOTO WASHLET – an attachable toilet seat that came with three electronic functions: rear cleansing, dryer and a heated seat. The WASHLET and its many incarnations over the decades has sold more than 50 million units to date, gifting TOTO cult status in Japan (the company even has its own museum).

“Next time you go to the toilet imagine not washing your hands, how dirty would they feel for the whole day?” asks Floyd Case, TOTO’s project and specification manager. “You cannot compare the clean feeling you get from using a washlet compared to using just paper.”

In Europe, TOTO’s sales have doubled year on year since 2009, and since 2013 TOTO have opened sales offices in London, Paris and Düsseldorf. In America, its sales have more than doubled in the past half decade. “In the far east it is common to experience the benefits [of these toilets]. This has translated well with travellers returning to Europe with first-hand experiences,” Osada says.

TOTO now employ over 900 researchers who experiment with the future of pooing, many of them based at TOTO’s Universal Design Research Centre in Japan; their tireless work has brought us functions such as the ‘PREMIST’ (which sprays the bowl before use) and ‘TORNADO flushing’ (jets that create a whirlpool of water).

In Japan, the penetration rate of these high-tech toilets is over 80 per cent – you’ll find them in service stations, hotels, nightclubs, everywhere. After Germany, the UK is the second largest European market for shower toilets, but it still lags far behind – culturally, a bidet has never been a centrepiece of British bathrooms.

“People won’t convert to these toilets unless they try one, so I’m trying to get bums on seats,” says Alex Evans, the founder of Washloo, the UK’s only smart toilet brand. Evans entered the bodily functions business three years ago while still in his twenties, converted after a trip to Japan. Now, he believes using toilet paper is "barbaric.”

Robotic toilets are a luxury item, but Evans believes our cultural attitudes also act as a barrier to adopting shower toilets. “These toilets aren’t something we’ve grown up with, whereas in Japan they’ve had them for decades,” says Evans. “Americans don't like talking about arses and bums, and for us, we don't sit around the dinner table and talk about it...unless you're in my family.”

Japanese people just aren’t as embarrassed by the brown stuff. The Unko Museum – ‘unko’ meaning ‘poop’ in Japanese – recently opened in one of Tokyo’s busiest shopping malls. It has poop themed video games and a gigantic toilet that allows guests to flush themselves.

“Unlike watches, smartphones and other smart products, our bathroom habits are very much still private,” says Jure Rogel, director of European smart toilet suppliers Tooaleta. But Rogel believes Westerners are growing less poo prudish. “Many feel their bathroom business is their business alone, but it’s less far less taboo now to mention you own and use a bidet seat,” he says. “People are more open to different topics today, especially the younger generation who are very difficult to shock.”

Evans says that Washloo is growing by a “substantial” amount year on year, estimating that around 60 per cent of sales come from the luxury market with 40 per cent from elderly or disabled consumers. He attributes this increasing popularity to a few things. “There's more awareness and advertisement online,” he says. But also, as people grow more aware of their environmental impact, the eco-benefits of shower toilets are becoming a key factor for consumers.

Today, much of America’s toilet paper comes from the boreal forests of Canada, an area of land containing “at least 12 per cent of the world’s carbon stores in its plants and soils,” says a report from the Natural Resources Defense Council (NRDC). “To make toilet paper, we have cut down 28m acres of this Canadian forest over the past 20 years, [an area] the size of Ohio alone,” says author William Bruneau, author of The Bidet.

The US tissue market generates $31 billion (£25bn) in revenue every year, and Americans, who make up just over four per cent of the world’s population, account for over 20 per cent of global tissue consumption. “Toilet paper was a great idea back in 1880 when our US population was only 50m. We now have seven times more [Americans] 140 years later using the same finite resource,” writes Bruneau in a revised copy of The Bidet.

Environmentally, toilet paper is too expensive to just “chuck down the toilet,” says Evans. Alternatives like wet wipes are hygienic but they’re a primary contributor to fatbergs, large congealed blobs of non-biodegradable matter that clog sewer systems across the UK (a chunk of one is on display at the Museum of London – you can watch it live).

That’s not the only potential planetary benefit of a widespread switch towards smart toilets. Many models come with self-cleaning functions, reducing the frequency the need for harsh chemicals and bleaches. Although they function on mains power, they can save water – Washloo’s premier product, the Washloo Prestige, uses less than a gallon per flush compared to around 1.6 gallons for normal toilets, says Evans.

Singing, spraying, self-cleaning toilets can help in the fight to save our planet, if we can suppress our bathroom embarrassment enough to start talking about them. “When I tell people that a little nozzle comes out of the toilet and sprays you, they look at you like you have three heads," Evans says. “But people are going greener and they’re looking at different ways of doing that. Toilets are one of them.”