Japan’s bidet toilet capsule toys are here, but are they strong enough to wash your butt for you? 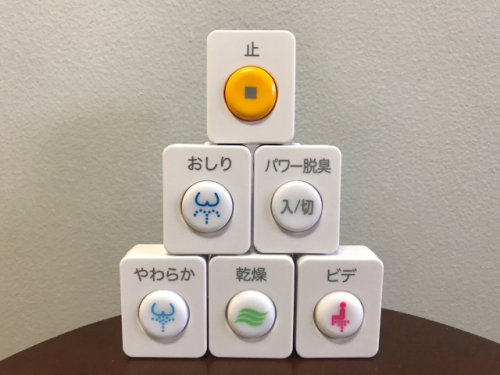 Japanese toiler manufacturer Toto calls them “washlets,” and its rival Inax goes with “shower toielts.” Meanwhile, to many appreciative foreign visitors using one for the first time, they’re simply “heaven” or “paradise.”

Whatever term you choose, Japan’s high-tech toilets that shoot a cleansing stream of water onto your backside are one of the country’s loftiest achievements, and so it’s actually kind of surprising that it’s taken this long for them to be turned into gachapon vending machine capsule toys.

But last month, capsule toy maker Kitan Clun gave us a heads up that washlet button squirt guns were on their way, and now that they’re stocked in machines across Japan, we dropped a handful of coins to procure the entire set of six different designs.

Each design is modeled after a real-world washlet feature, complete with the more-or-less standardized illustrations seen on the toilet’s control panels. However, all of the capsule toys have the same function, operating as water guns that squirt out liquid when you give them a squeeze.

▼ Said squeeze, by the way, is pleasantly pillowy, in contrast to the hard plastic of actual washlet controls.

Even though they all do the same thing, for the purpose of our squirt test we decided to use the oshiri/backside wash model. Filling the squirt gun is easy, since all you have to do is set it in water for a few moments to fill it up.

Then just give is a squeeze and…

…you get a nice little stream of water coming out.

As clever and funny as the idea is, though, there’s not really enough water pressure to use these as a washlet substitute and hose off your poo-propelling parts. With the right angle and a sufficiently strong squeeze of your hand, you might see some modest results, but the squirt gun’s water-holding capacity isn’t really large enough to handle even a modestly sized number-two session, so you’ll still want to use a legitimate washlet, or at least some imperial-grade toilet paper, for a through cleanup.

However, while it might not have been an intentional part of the design process, there’s actually another way to use Kintan Club’s washlet button toys. Remember how we mentioned above that one is styled after the button you press on a real washlet to get a drying gust of air sent towards your exposed lower body? Well, if you don’t fill the squirt guns up with any liquid, giving them a squeeze creates a puff of air, which you could use to partially and gently draw off any delicate areas.

The washlet button capsule toys are priced at 300 yen each, making them affordable indulgences